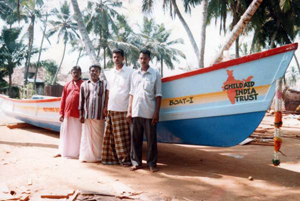 When the Big Tsunami happened, Child Aid was one of the first smaller charities on the scene. We were told, `don’t rebuild our homes`, they could do that. As fishermen they simply wanted the ability to work again and that meant boats. Child Aid managed to have built five ocean going boats with powerful engines, in which three families in each boat took control. Five boats meant that at least fifty or sixty people began to reconstruct their living. Child Aid also helped coastal village families get back to work, patching up their premises and providing stock for them to start trading again.