This project needs you to become a patron.

The home started with eighty children, but had to reduce numbers to forty five because of lack of funding.

Amala Anbu Karangal (Immaculate Loving Hands) AAK for short, is a project to help some of the most vulnerable people trying to survive alone on the streets in Indian cities.

Who are these people? Well, in short they are girls without parents, girls who for one reason or another have been deserted, left to fend for themselves … 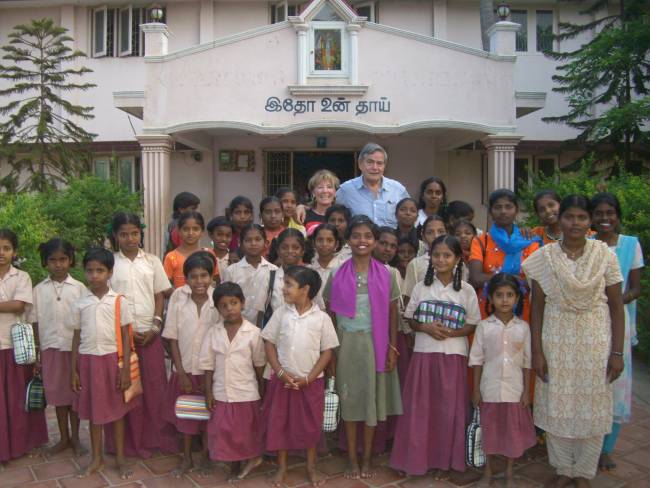 And being a girl in India is no easy task. We will tell you a little more about AAK, how it came about, some of the girls stories and Child Aid’s aim in trying to help. Let's paint a picture ; a child is living with their Mother and Father, one parent gets ill and maybe dies, so creating a `one parent` family, in India this is difficult enough, but then the other parent either finds he/she has to work too hard, or contracts an illness and dies, or a mother finds life too hard and goes to live in another village with another man ! A story not uncommon.  No man will want to support girls - it costs to much to marry them off, also no relative will take girls under their wing - for a similar reason.  So what happens ... the girls beg on the streets or collect saleable waste from rubbish tips to survive.

A tough life ?  It is absolutely NO LIFE for a child.

So a group of religious sisters decided to do something about it. They had donated to them a house, then set about rescueing as many of these girls they could to come and stay in the house - they would be fed, clothed and given schooling.  Simply to get the children to believe there could be a better world was not as easy as it might seem, they trusted no one.

But as soon as the house was established, the sisters found that they had created a problem for themselves, the girls kept coming, everyone knew about the good work being undertaken, to the point where the sisters couldn’t fund the very big task they had embarked upon. By the time Child Aid came on the scene there were around eighty girls within the house, and this was rising day-by-day, month-by-month, of course you cannot turn children away, so they asked for help, how could anyone refuse - so, if we are going to appeal to you, you should know about AAK. Because these children are housed in a rescue home, we try not to specify support for any one child, they are all equal. But if a face or story appeals to you and you would like to help, as soon as all the children are sponsored, they will become your sponsored child. You can sponsor that child via the donate page.